“How can anyone pray without ceasing?”

For some people prayer comes easily.  For other people prayer it is something they struggle with constantly.  There are many forms of praying that do not need long amounts of time or require great effort.  What matters is that in a time span of 24 hours in a day we look and seek out as many opportunities that we can to make that brief connection with God.  We acknowledge that God is in our midst.  We call on God for help in our duties and responsibilities.  We intercede for the people who are close to us and for the world as it struggles to get through hard and difficult times. 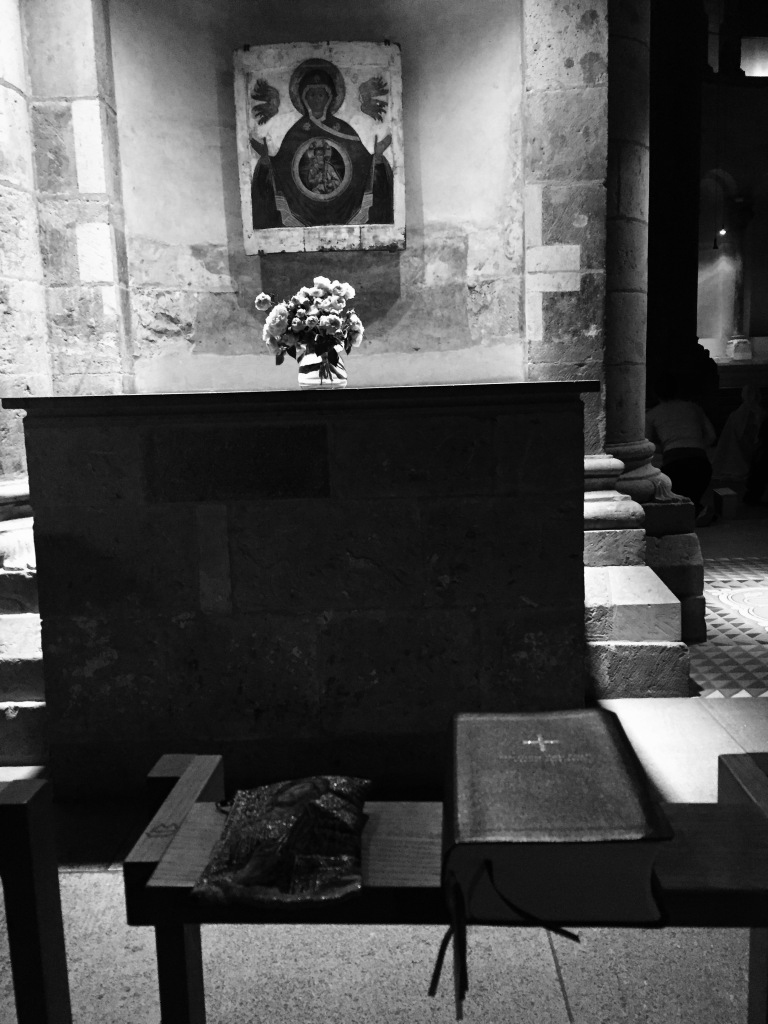 When I was with the Jerusalem Community there was a short prayer that they prayed morning, noon, and night in community,  that seemed so meaningful that I had seen only in Orthodox Churches.  It was the “Trisagion”.  The trisagion is a prayer we use as an option to begin the Eucharist in the Episcopal Prayer Book (BCP).  It is a threefold invocation to God.  “Holy God, Holy and Mighty One, Holy Immortal One, Have Mercy upon us.”  It is recited three times while touching the ground and making the sign of the cross each time the prayer is said or sung.

There is something very simple yet very profound about this prayer.  First, because it recognizes God’s immensity and strength in the face of our own weakness and debility.  Second, it recognizes God’s ability to see the big picture which many times we struggle with in our daily coming and goings. Finally, it recognizes God’s capacity to overcome all the factors of death and destruction that surround us because of God’s immortal and infinite nature.  In German the translation to the last phrase (Holy Immoral One)  is, “Helig und unsterbliche Gott, hat Erbarmen mit uns.” (Holy and un-dying God, have mercy on us.)  This is a simple prayer that we could say morning, noon and night or repeat it constantly during the day.

I was watching a video of a very famous and well known Monk DAVID STEINDL-RAST, from Austria who began the “gratefulness movement” some years back as a Universal way to unite all people together in a prayer of Thanksgiving to God.  Every time I saw a picture of him in different circumstances I saw a small finger rosary in his hand.  It was evidently something that he used each and every day of his life.  Just the fact he had it always in his hand and was constantly in touch with the ten beads and cross he was able to connect at any time and any moment with the “sacred”.  I myself found some wonderful finger rosaries on line that I now give out to friends and I always have one in my pocket or in my hand no matter what time of the day it is.  Sometimes I say a Hail Mary or the Lord’s Prayer alternatively.  Sometimes I say another brief prayer like the Jesus prayer (Lord, Jesus Christ Son of the Living God, have  Mercy on me or just Jesus…Mercy)  Sometimes I say another brief or short prayer that seems apt to the moment or time of day.  Having the finger rosary in hand also helps me when I am slightly anxious or nervous or going into a new or different situation or environment.  It reminds me that God is ever present in MY specific situation and need.  This is another great way to keep in contact with the sacred flow of life during the day time.

Prayers before and after meals.

Perhaps saying a prayer before and or after you eat seems something out of “the family that prays together, stays together” movement.  Or perhaps it brings to mind some retro photo of a 1950’s family gathered around the table saying grace. Everyone looks happy and content, with their hands folded.

I grew up in a family where prayers were always said before and after meals, whether we were alone or together.  One side of my family was Protestant, Dutch Reformed, and the Other side was Roman Catholic.  On both sides there was a time to pause and say either a prayer from heart that was memorized or a prayer that came to mind in the moment.  Even now at home we have a “prayer dice” that we flip and say the prayer that comes on the little square block depending upon how it lands.  I am sure that my Protestant grandmother would not like the prayer dice thinking that it was gambling with God.  Whatever the form we chose to pray before and after meals, these are great moments in the day when we can pause, think about the many gifts and benefits that we have, remember the many hands and persons who are responsible for this food and brought it into harvest, and be grateful.

One of the oldest prayers said traditionally two times a day, at Noon and at 6 p.m. was the Angelus.  It is called the angelus because the prayer in latin begins with the word Angel.  “The angel of the Lord declared unto Mary, and she was conceived by the Holy Spirit.” (Hail Mary)

The Angeles was said and created at a time when most of the world was Rural and not Urban.  As people were working in their fields and doing their chores, the local Church bells would always ring at Noon and at Six.  People of course did not have watches so these were the only times in the day that they knew what time it was.  The prayer is three fold, like the Trisagion.  The prayer is a daily commemoration of the Incarnation, the coming among us of Jesus as the Son of Humanity.  It also remembers Mary’s open-ness to God as she accepted the responsibility to become the “God-bearer” the Theotokos.

It is a daily prayer that helps us remember that God is in our midst through the presence of his Son Jesus, and that we like Mary are Servants of the Lord, always seeking to do his will in our life, day in, and day out.

In the last 25 years after Vatican II, Monasteries and Benedictine Communities began to borrow from our Eastern neighbors the techniques of Transcendental Meditation and Centering Prayer.  The concept is simple yet varied from one custom to the next.  It is basically the practice of sitting quietly in one spot and repeating a religious phrase or Mantra over and over again as one makes focus on one’s breath and breathing.  It pretty much follows all of the Meditation practices that exist the world over.  There are now phone Apps. that help one continue this practice and use it on a daily basis.  It slows ones mind and heart rate down and allows one to truly relax and just Sit, in the presence of God.  It can be practiced alone or with others in a small group.  It can be as brief as 5 or 10 minutes and as long as one is able to sustain concentration and relaxation in a seated position.

It can also be done listening to contemplative or meditation music or nature sounds while praying to keep away mindful distractions.

“In the Monastic tradition of short prayers,” says Cummings, “the formula or short phrase chosen is considered to be a word of life, a word that will be life giving when taken down into the heart and allowed to nourish the roots of faith, hope, and love.”

From prayer to action

The daily recitation of short prayers is far from a cure all of ones ills or problems.  As a matter of fact like all Monastic Practices, they are only a means to the end, the end being a closer walk with both God, and Humanity in the form of our daily existence.  Imagine yourself in a war zone, filled with the noise of constant bombardment and the shrilling cries of people who are suffering around you.  Imagine the dust and the dirt and the destruction.  Imagine the feelings of anxiousness and worry that are constant and with you at every waking and sleeping moment.  Then imagine your favorite place to be in Nature.  Perhaps it is an open field, or a mountain slope, a flowing river or by the sea shore.  Wherever it is imagine the calm and the peace, the quiet and the sense of fulfillment and well being in your soul as you sit and relax and connect with the eternal and life giving flow of nature.  These two extremes are about the use and meaning of “short prayers”.  Imagine that every time you say a short prayer you are given the sensation of well being when you are in a natural setting.  Imagine the absence of these short prayers as being on the battlefield struggling with the surrounding and impending destruction and violence.  Which do you chose?

“We believe that the Divine Presence is everywhere, and that the eyes of the Lord gaze upon the good and the bad in every place.”  (Rule of Benedict chapter 19)

We return to the question at the start of this chapter, “How can anyone pray without ceasing?”  Prayer is a gift, it is a practice, it is a way of being and doing, it is not about emotions or feelings, it is about relationship and connection with something greater than ourselves.  Think of a friendship that you once had where you were very very close to someone but no longer have that connection.  Why was the connection so close?  In one of my young romances I had a romantic relationship with a priest living in Europe.  We had met briefly at a clergy course for new priests (this was some 25 years ago).  It was not a physical relationship but a deep emotional one that lasted for nearly two years.  We wrote letters to each other every week.  We wrote about our work, our lives, and our deepest desires and concerns in those times.  The connection was there because we made an effort to keep connected to each other through short and brief means of communication (phone calls and letters).  Now we have Facebook, Twitter, What’s App etc.  WE can only hope that our love affair with God is more than just a fleeting “affair” or a passing love boat filled with emotions and pheromones out of control.  The use of daily short prayers as a “connector” with God is user friendly, practical, and even variable.  “Short prayers,” says our author, “are one of the monastic practices for awakening the heart to a life of continual love.”